While Folsom’s Historic Truss Bridge served as a sturdy means of transporting pedestrians, cattle, and small vehicles, the  expanded use of he automobile rendered the truss bridge inefficient and outdated. It was determined that a more sturdy and wider bridge needed to be built in Folsom across the American River. The Rainbow Bridge was built in 1919, which sealed the fate of the truss bridge (at least temporarily).

The Rainbow Bridge provided a two-lane crossing that could carry heavy vehicles. This is a very attractive bridge with its underside arches. It served the area before the Folsom Dam was built, in 1955, to control the raging winter torrents of the American River. It survived floodwaters and still serves the area, though now in a secondary capacity, and is as beautiful as ever. Even with the much needed Lake Natoma Crossing now fully functional, the Rainbow Bridge continues to serve as an everlasting symbol of Folsom. 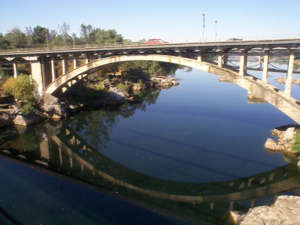