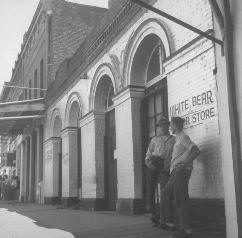 In November l945, a letter to the Editor, unsigned, and titled “open forum” appeared in the Folsom Telegraph. The letter complained about high county taxes, and advocated that the incorporation of Folsom would give “more bang for the buck”. The author continued to state that we get value received for our fire and sanitary districts, but nothing else! The letter goes on “We have two County Officials here and must pay for most any service they render”. This is how it all started!

City of Folsom – The Beginnings

In December of 1945, the County set a public hearing on incorporation. Petitions had been gathered and filed with the County for the hearing on 31 December, to vote on the application of Folsom to become a sixth-class city. The hearing was to hear protests of persons interested in the boundaries of the proposed city. The petition bore the signatures of 211, representing 33.7 percent of owners of title to lands within the area proposed for incorporation with 31.13 percent of the assessed valuation. One person appeared to oppose the incorporation, Mr. Joe Murer. Proponents were the newly resurrected Folsom Chamber of Commerce, represented by Mr. DeWitt Sparks, an attorney from Roseville (later to become the first City Attorney), and Cy Thomas, an engineer from The Natomas Company, who drew up the map of the area proposed for incorporation. Joe Murer protested the inclusion of his property in the lower part of the area proposed for incorporation and said that his neighbor Mr. Theo Berg had authorized him to enter a protest for his property.

However, Mr. Berg’s property had not been included in the proposed city. The board delayed the matter for a week while Mr. Murer’s protest was being considered. The following week the board approved the boundaries. The proposed city had a population of 1,350 residents. Joe Murer, who had asked for exclusion, did not renew his request, so Joe was willing to go along. The Chamber of Commerce fathered the movement. “To help the businessmen and representative citizens solely for protection for property owners and also as a means of keeping in step with other progressive communities throughout the state”.

It must be noted that the Natomas Company, owner of the water system was accused of wanting water meters. At that time water was $1 per month for unlimited use. Mr. R.G. Smith of Natomas Company said, “Buy the system”. The anti-incorporation committee, headed by Merrill Regan said it would cost more to live in an incorporated City, besides the Sheriff providing adequate protection. This was about the time that the Folsom Dam was about to be built, and the proponents were concerned about the type of people who would be brought into our town during the construction period. This concern was unfounded because the workers brought in during construction were really fine people, and many of them remained to live in the City.

The big day came and the election returns showed 548 people turning out to vote, with 280 votes for and 268 votes against incorporation, the measure passing by a mere 12 votes. The results for council were: Lee Miller 361, Harry Patton 272, Eugene Kerr 268, Wendell Van Winkle 260, Abe Relvas 228, Charlie Gallagher 219, and Polk Overholt 190. Also elected were City Clerk, Hazel McFarland, and City Treasurer, Wilma Hoxsie. Although Lee Miller received the highest number of votes, he was denied the Mayor’s position because he opposed the incorporation. The first organizational meeting was held on April 30th at the home of Hazel McFarland. Hazel was sworn in office by George Eveland, Justice of the Peace, and Hazel in turn swore in the new councilmen and City Treasurer in office.

A discussion was held about money – They had none, so each new Councilman put $10 into the treasury. Eugene Kerr was elected Mayor, and DeWitt Sparks was hired as City Attorney, for a “nominal” salary until income came up. He was ultimately paid $25 per month. Pretty good pay for an Attorney, right? There were three applications filed for Police Chief-no money-no action. The first regular Council Meeting was held at the Folsom High School, and from there the Council moved to several different locations.

The first correspondence received by the Council was a request from Warden Art Oliver, representing the Folsom Lions Club to close Sutter Street, between Wool and Riley Streets for a street dance. Remember that at that time Sutter Street was highway 50. Art Oliver was Marilyn Gautschi’s grandfather. Frank Buck wanted to start a garbage service, charging $1 per month. On July 3rd the City Clerk reported 40 business licenses issued for a total of $341. Then the City received $1,990 to maintain Highway 50, which at that time was in the City Limits from Natoma and Folsom Boulevard to Sutter Street, out Riley Street just past the High School. This was the beginning.

Jack Kipp was a lifelong Folsom resident and served as mayor twice.
His knowledge of Folsom was amazing and will be missed. Jack passed away in 2006.