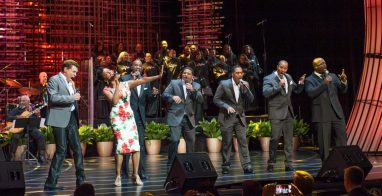 Georgia on My Mind – The Music of Ray Charles, comes to Harris Center on February 13th.

Ray Charles, a Georgia native son, was an American treasure. He transcended racism, cultural upheavals, and spread his music based on Gospel, Blues, Jazz and Country around the world… he was a genius!

Boasting iconic tunes from the catalog of the genius himself, the artists make each song a winning part of the tapestry that is Ray Charles’ music.

Ray won every major award from the Georgia music hall of fame to the Hollywood walk of fame… from the Kennedy honors to a GRAMMY life time achievement award and induction into the Rock n’ Roll Hall of Fame.

Don’t miss opportunity to see his music truly celebrated by this amazing cast.