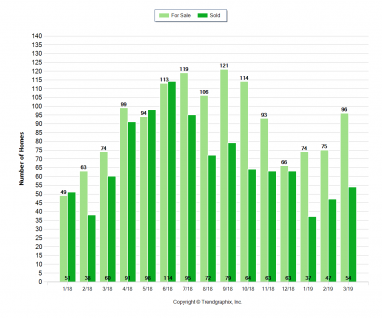 The Folsom Housing market started out the first quarter of 2019 with a somewhat-expected whimper.

138 homes were sold, compared to 148 for the same period last year. That’s not a huge drop, but it’s not growth, either.
Inventory was down as well, which is typical, with many sellers waiting for better times and better weather.
We typically see a dip in prices too, and the average price per square foot was down to $259, the lowest since May of last year
Homes were taking longer to sell, too, with an average of 36 days on market, compared to only 14 days on market in March of last year.
Let’s see if we can make some sense of this: On one hand, we expect a slow down during and just after the holidays. Most buyers don’t want to go out home shopping when it’s cold, dark and wet outside. Sellers don’t want people interrupting their holiday plans, and tracking mud into their homes either.
With that in mind, I always caution to take first quarter numbers, unless drastically different than the previous year, with a grain of salt.
First quarter closed sales reflect the activity of the brave, bargain-hunting or relocating buyers, as well as the motivated sellers. Softer demand can result in lower prices.
Now, we’ll see what’s going to happen now that the weather is better and interest rates have fallen.
Speaking of interest rates, remember last November when the ‘experts’ were predicting 5% by January, and 5.5% by summer? Zillow even put out an article stating that rates would hit 5.8%, calling it “territory not seen since the dark days of 2008.”
So, what happened? Mortgage rates fell from a national average of 4.9% in November, to 4.17% today.  That’s pretty significant, huge even.
A $400,000 mortgage at the predicted 5.5% interest would have a payment of $2271 per month. At 4.17%, the payment is $1949. If I’m doing my math correctly, that’s a difference of $322 per month.
Will low interest rates be enough to cause a rise in sales? We’ll see. So far this month 58 homes have gone pending, more than the entire month of January and matching February, and the average days on market for those pending was 20, compared to 36 in March.
As of today, there are 111 homes for sale in Folsom, and 29 of them have come on the market in the past week.
A rise in inventory, a drop in rates, a strong economy, and nice weather. Could make for a good spring.
For buyers, if you were taking the ‘wait til next year’ approach, next year is here, take advantage of the situation while you can.  More inventory means more choices, and lower interest rates means homes are more affordable.
For sellers, lower interest rates may help keep prices steady, though I’d suggest pricing it right, and detailing your property for today’s picky buyers, which we’ll cover in another article.
Any questions? Drop me a line.
Steve Heard is Realtor with EXP Realty #01368503
and owner of www.myfolsom.com
Reach Steve at 916 718 9577 or steve@myfolsom.com