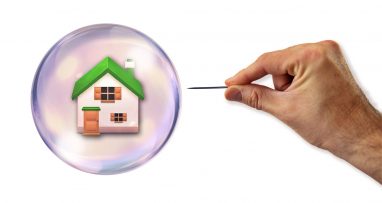 You hear it about it from your friends and neighbors, you might even see a few experts spout off about it. It’s a hot topic on online chats. ‘We’re in a bubble’, ‘the market corrects every 10 years, so we’re due’, ‘this just isn’t sustainable!’, ‘Sooner or later, people are going to refuse to pay those ridiculous prices!’

What do you think? Are those statements true? Are we ‘due’ simply because history repeats itself? Are the current prices unsustainable? If so, why? Will people refuse to pay ridiculous prices? Are the prices, in fact, ridiculous? If people don’t buy, where will they go? Isn’t it hard to find a rental?

We Realtors are usually an optimistic bunch. We have to be in order to survive, so although people look to us for answers, they are also sometimes skeptical. ‘Of course you’re going to say everything is great. You only get paid if people are buying!’

We also have to be realistic though. If there’s a bubble that’s about to burst, I want to know about it.

Predicting a market crash or correction is kind of like predicting the end of the world. Some day, you’ll be right.

So, I decided to look at the facts, and mix in my experiences to come up with my opinion.

Before I go there, however, lets talk about how we define a bubble. Google it. Most definitions are similar to the one on investopedia.com ” A housing bubble is a run-up in housing prices fueled by demand, speculation and exuberance. … Speculators enter the market, further driving demand. At some point, demand decreases or stagnates at the same time supply increases, resulting in a sharp drop in prices — and the bubble bursts.”

What happened the last time around?

Back in 2004 and 05, egged on by lenders, Realtors, even friends and neighbors, people were buying as much house as they could get approved for, just knowing they were doing the right thing for their futures. ‘Gotta get in now!’

Speculators were putting deposits on new construction, only to sell the homes for a profit upon completion.

Buyers were camping outside of sales offices to ensure they didn’t miss out.

It was a crazy time.

Although it was happening all over the country, I’m going to focus on Folsom. It’s where I live, where most of my sales are, and where I have the most expertise. The Greater Sacramento Region is experiencing pretty much the same thing.

Here are a few facts about the Folsom housing market back then:

Then, people started talking about the bubble. ‘We’re due for a correction’, ‘This isn’t sustainable’, and ‘People are going to refuse to pay these ridiculous prices.

It didn’t seem to have an effect. Even though interest rates were high, and homes were getting less and less affordable, more and more people were buying.

Every month it got worse, and every month people were saying things like, ‘This is just the beginning’, and ‘I told you so!’

The financial experts were weighing in. ‘We won’t see a recovery for 10 years’, and one even said, ‘We won’t see those prices again in our lifetime.’

Eventually, the job market started to improve. Unemployment levels dropped, but housing hadn’t caught up yet.

Investors, flush with cash, were snapping up homes at what we consider bargain prices. They didn’t know if we were at the bottom, but they knew there was an upside, and they were going to take advantage. Companies such as Blackstone opened offices in the Sacramento region to get close to the feeding frenzy.

By February of 2012, Folsom homes for sale averaged $148 per square foot. We had hit bottom.

Things started to improve. People were optimistic. Unemployment levels continued to drop, and someone declared the crisis was over.

Still, there were doubters. ‘This is just temporary.’ ‘Once the investors leave, the market will normalize, and prices will fall.’

It didn’t happen. Prices started rising. Homes were selling fast. By March of 2013, the average days on market stood at 15.

Where are we today?

What’s causing the fears of the bubble? Other than the ones who are always predicting the end of the whatever, are their factors we should consider?

Let’s compare to the last one:

Just looking at those stats, one might indeed think that history is repeating itself, and we are in a bubble.

Now, before we hit the panic button let’s take a look at a couple of other factors:

According to the California Department of Housing and Community development,  developers should be building 180,000 units per year to meet the growing demand, but are falling short by about 100,000 per year. Builders cite fees and regulations as major hurdles.

Our ace in the hole?

There’s one other factor; the Bay Area exodus. According the Greater Sacramento Economic Council, roughly 18,000 people leave the Bay Area for the Sac region, and as San Francisco gets more crowded, less affordable, and less safe, Sacramento and it’s growing list of amenities becomes more attractive.

So, we have low interest rates, which make for lower payments, we are short on housing by over 1 million units, we have a strong economy and strong demand for housing.

To me, it’s not about speculation or exuberance, it is about supply, demand and affordability.

I’m going to say that, barring some catastrophe, the housing market is not likely to crash any time soon. No, we’re not in a bubble.

What do you think? Agree or disagree? Am I missing anything? Am I right, or am I just an overly optimistic Realtor with a biased opinion?

Discuss in the forum

Steve Heard is a Realtor in Folsom Ca, and owner of www.myfolsom.com