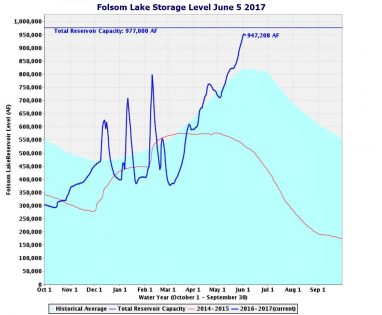 When the Folsom dam operators were releasing massive amounts of water,  many Folsom residents were alarmed.

How could they do that when we’re in a drought? Are they crazy?

The Bureau of Reclamation, which operates the dam, was accused of making political moves, using an outdated operations manual, or just being incompetent.

The dam operators, on the other hand, said that if they didn’t release that water, Folsom lake would overflow and flood the valley.

Well, over the last 6 months, they released more water than the lake’s entire capacity, and guess what? Folsom Lake is now at 97% of capacity, with more water coming down from the Sierras!

It is great to see it nearly full, after a couple of scary years, and great to know that our dam operators know what they are doing.

Once the new spillway is completed, it will allow them to hold more water for longer periods, but still, in wet years, they will have to release a lot of water to keep us safe.