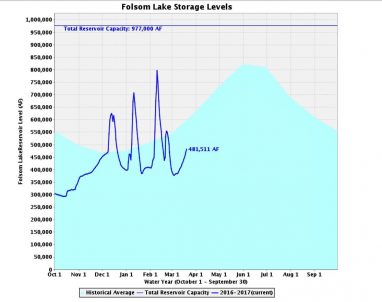 On Facebook, here on MyFolsom.com, and all around town, people frequently remark that after all of the rain and snow we’ve had, Folsom Lake still looks like a puddle, and they wonder why.

They will either blame the Bureau of Land Management, the operators of the dam, saying ‘They’re incompetent!’, ‘They’re using an out-dated manual!’, or ‘It’s the Liberal politicians!’, ‘They want to send the water to LA!’

I’m not cynical enough to believe that it could be any of the above, so I just looked at the numbers.

Are you ready for the REAL reason the lake level is so low?

It’s so the lake won’t overflow and flood the Sacramento valley.

Did you know that that was what the dam was designed for? Flood control? Its primary purpose is not drinking water, boating, fishing or giving us something pretty to look at. It’s to prevent flooding.

Take a look at the chart above. Folsom Lake holds about 977,000 acre feet of water. The light blue shaded is the historical average storage throughout the year.

Looking at the dark blue line, which looks like a roller coaster or an EKG, and you see that the lake was at 800,000 acre feet in February, over 80% of its total capacity, 4 months before the average peak.

If you add up the massive amounts of water the dam operators have released over the past 3 months, it totals over 1,000,000 acre feet of water. That’s more than the entire capacity of the lake, and we still have over 481,000 acre feet remaining, with more rain, snow and snow melt coming.

In other words, the reason the lake is so low, is because the dam operators are doing their job and preventing massive flooding to the half million plus residents of the valley region.

The new spillway nearing completion should be operational before the year is out, and in the future, the dam operators will be able to hold more water for longer periods, which will be helpful in drier years, but they may never allow it to fill up in February.

So, the next time you hear someone complaining that the incompetent dam operators are wasting water, you can set them straight.

Questions or comments? Talk about it in the forum

Steve Heard is a Realtor based in Folsom Ca, and owner of myfolsom.com