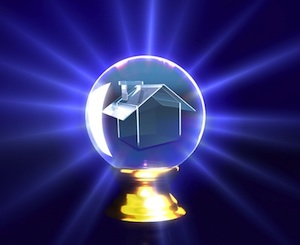 It’s the question I get every year, without fail: “What’s the Real Estate market going to be like this year?”

Although we can never be certain, with a little research, a bit of educated guesswork, and my handy crystal ball, I’ve come up with the top 7 predictions for the local real estate market for 2017. Here’s what you can expect to see:

Over the past few years, there were quite a few articles written about how Millennials (born between 1982 and about 2000) were so much different from preceding generations, and how they didn’t want the same things their parents did. Namely, they didn’t want marriage, kids or home ownership. They wanted the freedom to travel and indulge themselves in whatever they wanted, and of course, a trophy.

Well, times have changed, and now it seems that Millennials are just like everyone else. With many of them in their late 20’s and the oldest of them now in their mid 30’s, just like their parents before them, they’re falling in love, getting married, having kids and putting down roots. They see the value of owning vs. renting (or living with their parents), and according to the Zillow Group report on Consumer Housing Trends, they represent the largest segment entering the housing market today, noting that half of home buyers in 2016 were under 36 years of age.

Author David Bach in an article about Millennials, advised them to buy, calling home ownership an ‘escalator to wealth’, adding,  “The average home owner is 38 times wealthier than the average renter.”

One of my Millennial customers, 27 years old, decided it was time to move out of his parents’ house. When he found that renting a condo cost about the same as buying one, the decision was easy. He now has his own condo in Roseville, with a payment of about $1300 per month.

He’s not concerned about fluctuating values or interest rates or rents.  If he were to do nothing other than pay his mortgage for 30 years, he will end up owning a home free and clear, and it will likely be worth much more than it is today. Whereas if he rented for 30 years, he’d be in the same position he is today, or worse, as rents aren’t likely to go down.

Expect to see more and more Millennial age people ‘getting it’ and stepping up to buy their first homes.

2) Boomers Down Sizing (or Right Sizing)

The Baby Boomers are now between 53 and 71 years old, with many retiring or getting close to it. According to a National Association of Realtors survey, 71% of homeowners over the age of 55 have not moved since 1999. 36% have stated they are planning to move.

We expect to see them taking advantage of their equity, seeking an easier lifestyle, and getting closer to cities, amenities, family and friends. Others will head for semi-rural areas such as the Sierra Foothills east of Sacramento, where they can get more land and space, and still be close to amenities.

Whatever the case, many will be selling, and choosing homes that are the right size for their changing lifestyles.

One couple I worked with last year left their $700,000 home in the crowded North Bay Area, for a smaller single story home in Granite Bay, paying $415,000 cash. They’re close to the bike trails and Folsom Lake, and short drive to shops and restaurants.

One thing to note is that many of the Boomers will be going after the same sort of housing (smaller, less expensive) as the Millennials. With the current lack of inventory, expect some competitive bidding.

3) Bay Area Residents Cashing in and Heading Out

San Francisco Bay Area residents of all ages seem to be getting tired of the cost, crime and crowding they deal with on a daily basis.

According to a poll by the Bay Area Council, 1 out of 3 residents surveyed said they are considering leaving.

San Francisco is by most accounts one of the most beautiful cities in the world. The setting between the ocean and the bay, the great weather, along with access to restaurants, sports, arts and cultural events is unmatched.

Now, the down side: The median home price in communities from Santa Clara to San Francisco is over $1Million, and the INRIX traffic scorecard rates the Bay Area as having the 3rd worst commute in the country.

Lastly, with nearly 20% of San Francisco home sellers lowering their prices last year, and homes staying on the market longer, the market may be cooling. We don’t expect Bay Area prices to crash, but perhaps will flatten, while other areas are on the rise.

Home owners waiting for the right time to pull the trigger may decide that 2017 is it.

One couple I know own a home in Millbrae worth over $1million, and they are planning to sell before things cool off, and join their friends who have moved to the Sacramento area.

Realtor.com’s economic research has revealed that Sacramento is the 4th hottest housing market in the country, only trailing Boston, Phoenix and Los Angeles. It is the only city to make the top 5 both this year and last.

The Bay Area Council reported that nearly 9% of residents leaving the Bay Area move to the Sacramento Region.

What makes Sacramento so attractive?

Let’s start with housing costs. The median price for a home in Sacramento is $283,000, compared to the just over $1million for San Mateo County.

The region has so much more to offer than cheap housing. Calling itself the ‘Farm to Fork Capital’ of the country, The Sacramento region has so many new restaurants, it is becoming a ‘foodie’ destination, and the Foothill wineries are being recognized as some of the best in California.

The Sacramento Kings’ new Golden 1 Center has revitalized downtown, with dozens of new shops, restaurants and bars serving sports and music fans as well as residents and tourists.

With hundreds of miles of bike trails, 2 rivers and, and shirt-sleeve weather usually running March through October, the region offers countless outdoor recreation opportunities. Unlike the Bay Area, families can have picnics without worrying about the fog rolling in and ruining it.

As far as housing, with plenty of room to spread out, Sacramento has something for everyone. Taking a look at Sacramento homes for sale, we find that a modern 2 bedroom condo in the Natomas area, only minutes from downtown, might run you $250K. A modest 3 bedroom 2 bath in Elk Grove goes for under $300K, a 2500 sq ft home on a cul de sac, with pool in Folsom goes for $550K, or you might like that 8000 sq ft palace overlooking Folsom Lake and with views of the Sacramento city lights in El Dorado Hills for just under $2million.

It’s all within easy reach of San Francisco and Lake Tahoe, too.

5) Folsom Will be Even Hotter

With all sorts of accolades, including being named the ‘Best Place in California to Raise a Family’, Folsom boasts low unemployment, outstanding schools, a charming historic district, low crime rate, and a strong sense of community.

Folsom homes sell for more per square foot than any city in the region, though still half of Bay Area prices, and there aren’t many available right now.

Checking Folsom Homes for sale, we find that there are only 64 homes for sale currently on the market, though this is typically the slowest time of year, with inventory peaking in late summer. Even so, at the peak last summer, there were 183 homes on the market, compared with 561 during the housing crisis.

With the demand high and supply low, prices should see moderate increases. How moderate? I’ve heard experts toss around 4% to 7%. Folsom saw an 8% increase from 2015 to 2016.

6) Multiple Offers Become the Norm, IF the House is Price Right

54% of last year’s home buyers made offers on more than one home, with 24% making three or more. With tight inventory, expect more of the same, this year.

Of my last 2 listings, I had 4 offers on one and 6 on another, with frequent calls coming in after we were already in contract. One of my colleagues had 15 offers on her last listing.

That’s a lot of disappointment!

Although the ‘sweet spot’ market, typically 3 to 4 bedrooms, 2 baths over 1500 to 2000 square feet, are the most popular and has the largest buyer base, there’s a number at which any home will sell.

Regardless if it’s a condo or a palace, if it is priced right, expect multiple offers.

If you’re buying, when you find a house you love, be prepared to write your best, strongest offer. You may not get a second chance.

A cautionary note to sellers; price it correctly. Don’t expect someone to pay you $450K for a $390K house. If you over price it, it will sit, get stigmatized, and you could end up selling for less than the average.

7) Interest Rates Could be a Game Changer

All of these predictions can get kicked to the curb if there is a significant increase in rates. Kiplingers predicted a couple of weeks ago that conventional mortgage rates would be at 4.6% by the end of 2017, but they were at 4.05% at the time. Since then, we’re at about 4.37%.

Even at 5%, it will still be cheaper to buy than rent in many markets, and 4.6% is still a relative bargain, but if rates go much higher, there could be a pull-pack on purchasing, causing home prices to stall.

So there you have it.

What do you think? Will my predictions come true? Did I miss anything?

Want to talk about buying or selling?

Drop me a line: