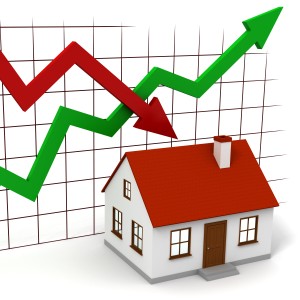 Should I buy? Should I sell? Are we on a bubble? What affect will the election have on the market?

These questions have been thrown at me with increasing frequency of late.

With the election of Donald Trump, there is a lot of uncertainty about the market, but isn’t there always something causing uncertainty?

I’ve been doing a bit of research, and interestingly enough, a study by Movoto showed that housing prices increase 1.5% less DURING the election year, regardless of who is running or who is expected to win. People tend to be cautious during the election year, and in the year following, housing prices typically gain by .8% less than the year before.

Why is the Folsom housing market continuing to see gains? California Association of Realtors (C.A.R) President Pat Zicarelli said in a recent interview that “Market fundamentals such as housing inventory, affordability, interest rates, job growth, and consumer confidence are the real factors that influence the housing market.”  Folsom has low inventory, high job growth, and strong but affordable home prices. 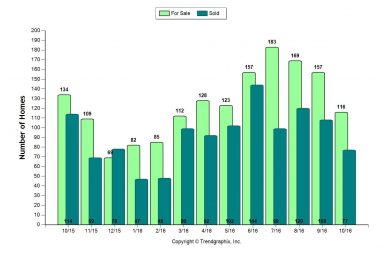 Folsom Homes for Sale in light green, and sold, since Oct. 2016

On the inventory side, a search for Folsom homes for sale shows there are 103 on the market today, down from 116 in October and 157 in September. While we typically see fewer homes on the market toward the end of the year, even at the peak of the summer buying season, there were only 183 homes for sale in Folsom, and with an average of 94 closed sales per month, demand is still strong.

Regarding affordability, the C.A.R. study showed that 43% of Sacramento area residents can afford a median priced home, compared to just 13% in San Francisco.

With unemployment rates falling below 5% nationally, and 156,000 jobs added in October, there is optimism that we’ll continue to see steady job growth. Folsom has added hundreds of jobs over the past 2 years, with Voxpro, Safe Credit Union and Powerschool all choosing to relocate their corporate headquarters to Folsom, and VSP opened a manufacturing facility, with over 250 employees.

In September, consumer confidence was at its highest in 9 years, though it dipped slightly in October. It remains to be seen what the election will do to confidence moving forward.

Interest rates have ticked up since the election, topping 4% for the first time since May of 2015. Increasing rates can affect affordability, but in many cases, it is still cheaper to buy than to rent a home.

Household formation is another factor to look at. There have been numerous articles in recent years, stating that Millennials are not forming households and not buying homes.

Today, there are 44 million Millennials between 26 and 34 years old.  As they age, and with expanding job prospects, they are leaving the nest, and starting to buy.

Another possible trend is Baby Boomers downsizing. After all, what will they do with all of that space, now that their Millennial kids are moving out? There are no hard figures available on these factors yet, but we’re expecting movement from both demographics.

Barry Broome of the Greater Sacramento Economic Council said today that 8.8% of people leaving the Bay Area move to the Sacramento region, and he noted that WalletHub recently named Folsom the ‘Best City in California to Raise a Family’.

So, where are we headed?

What’s it all mean? Should you buy? If you need a house, yes. It sure beats renting and paying off someone else’s mortgage.  If you’re planning on buying next year, sooner may be better than later.  No one is predicting a major increase in prices, but many are are predicting higher interest rates, and rates tend to creep up, little by little.

Should you sell? Only if you have reason to. As mentioned, we’re expecting modest gains next year, and with job growth and strong demand, your home should sell quickly (if priced right), but without a crystal ball we don’t know for certain what the heck is going to happen. If you want to take your equity and run, as many in the Bay Area are doing, this may be as good a time as any.