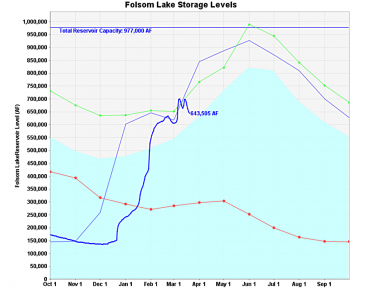 From the City of Folsom:
“Due to the uncertainty of the statewide drought, Governor Jerry Brown issued Executive Order B-36-15 calling for an extension of urban water use restrictions through October 2016. Emergency drought regulations have been adjusted, and the State Water Board recently reduced Folsom’s target from 32 percent down to 28 percent.
The move comes after the State Water Board incorporated recommendations by the City of Folsom, the Regional Water Authority and other regional water agencies to include conservation adjustment factors, like climate and growth that play a role in a community’s water use.
The City of Folsom will continue to advocate for lower water conservation standards due to the high volume of releases at Folsom Lake by the U.S. Bureau of Reclamation for flood control purposes.
While the target has eased for Folsom water customers, it’s important to continue conserving water according to the state-mandated conservation target until the State modifies or removes those restrictions. Learn more about the City of Folsom’s water conservation and rebate programs.”
Note that Folsom Lake is currently at 108% of normal for this time of year, and during the month of March, the Bureau of Reclamation, operators of Folsom Dam, have released enough water down the river to supply Folsom for 4 years. This is due to current regulations designed to prevent flooding, in case of rapid snow melt.