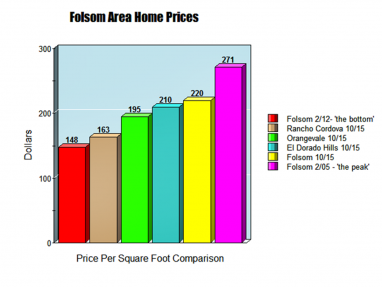 El Dorado Hills homes, which tend to run larger, finished right behind Folsom at $210 per square foot, with an average price of $611,000.

Orangevale has become an attractive alternative, particularly to first-timers, due to its proximity to Folsom and lower prices, at $195 per foot, with an average price of $348,000.

The number of days it takes to sell a home in Folsom increased to 46 days, up from 31 in September.  Orangevale was right behind at 47. El Dorado Hills, with its higher prices serving a narrower market was at 61 days, and Rancho Cordova at the other end, at only 33 days.

October typically shows a drop-off in both listings and sales, with kids back in school, shorter-colder days, and attention turning toward the holidays. While the number of homes for sale in Folsom fell by nearly 25%, sales were up by 33%, with 109 closed last month, compared to 82 for the same period last year.

Folsom was recently named by Wall Street 24/7 as 22nd best place to live in America, out of 550 cities compared, and it appears that home buyers in the region agrees.

Let’s see how things shake out as we head into winter.

So, what do you think? Will the price increases continue? Are we heading for a bubble?

Talk about it in the myfolsom forum.