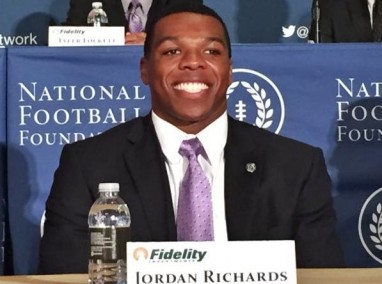 A big congratulations to Folsom’s own Jordan Richards, who was drafted into the National Football League on Friday.

Jordan, a star on Folsom’s undefeated championship team in 2011, was selected in the 2nd round, number 64 overall, by the New England Patriots.

The Patriots are said to have liked him not only for his physical skills but for his intelligence and leadership. At Stanford, where he is pursuing a degree in Public Policy, he was Team Captain, winner of the National Football Foundation’s Scholar-Athlete Award, and made the PAC 12 All Academic First Team.

Heading to New England, Jordan said, “I want to be the best football player I can be,” adding that his goal is to “be a sponge and just absorb.”