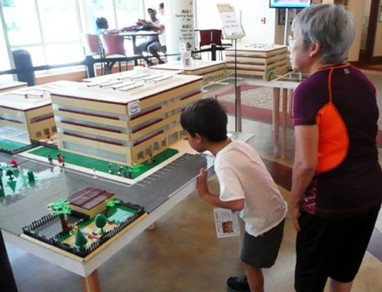 The Lego version of Intel’s Folsom campus, now on display in the Folsom Library, is a dream come true for Josh Hilliker. Literally.

“About 10 months ago,” says Hilliker, an Intel employee and big Lego fan, “I dreamt of creating one Intel building out of Legos. After I woke up, I thought it would be really cool to represent Intel in Lego pieces.”

He posted a blog inviting other Intel Lego enthusiasts to discuss the idea – not surprisingly, a lot of Intel employees are Lego buffs. Out of that session emerged something even bigger: “We decided, let’s do the entire campus in Legos for Intel’s 30th anniversary in Folsom,” Hilliker recalls. “Let’s create something we can be really proud of.”

The result is the amazing display that went up in the lobby of the library the week of July 28: the seven-building Folsom Intel campus recreated entirely in Legos. The exhibit will remain through Aug. 29.

Before it goes back to Intel, the structure is being displayed in only two places: the state fair, which just closed, and the Folsom Library. Then it will be installed permanently in the lobby of the Intel building FM5, which is open to the public.

How do you build something so exacting and intricate? The first step was to get hold of a CAD program the Lego company uses to inventory its bricks and design its creations. LegoLand was developed using this program. Once the Intel employees finished their virtual design, a few problems became apparent. Some of the pieces they needed didn’t exist at all, and others didn’t exist in the quantities called for.

After adjusting their plan to match inventory, the employees gathered the bricks. First, they ordered all they could – 20,000 pieces – from Lego’s factory in Belgium. Because it was a custom order, the bricks could be sent only by ship, a two-month journey.

Second, they tapped into an online consortium of Lego vendors and gathered bricks from scores of purveyors all over the United States and Canada. Altogether, the structure uses 100,000 Lego blocks, including 8,000 clear ones for the windows and 10,000 tans for the exterior walls.

About 150 people worked on the project, including 100 children from seven area schools.

The structure is free-standing, except for the gray floor tiles, which are glued to wood tables underneath, and the rooftops, which were glued with an adhesive made specifically for Lego-type plastic that rebonds the bricks and fuses them together.

The display includes not only the buildings but landscaping and even a couple of Intel’s solar panels. Still being worked on is a model of the Interior space of one of the buildings, which will show workers busy in their cubicles.

It is unknown if some of those workers will be designing Lego creations. That may depend on Josh Hilliker’s next dream.