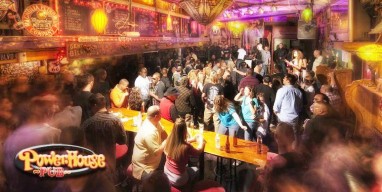 In response to concerns raised by Historic District residents and their supporters, the Folsom City Council recently designated the district an ‘Entertainment District’ and enacted new regulations to control the hours of live entertainment, and to hopefully cut down on the noise and other problems associated with late night partying.

This move was hailed by some, who say ‘it’s about time’, while others think it doesn’t go far enough, as it still allows partying and live music in what is also a residential area. Some residents don’t like the idea of their neighborhood being called an ‘entertainment’ district. Still, something had to be done.

Murray Weaver, owner of the district’s largest and most popular entertainment venue, the Powerhouse Pub, arguably has the most to gain and lose as the Historic District gains in popularity and in dining and entertainment options, bringing more people to the district to enjoy all that it has to offer. The Powerhouse Pub offers live music 6 nights a week and attracts hundreds who listen, dance, and to hang out on the patio.

With that in mind and sensitive to the feelings of the Historic District residents, Murray has written the following open letter to Folsom residents:

“As we are all aware the recent multi-million dollar revitalization of Sutter Street has enhanced activity in the Historic District, as anticipated, both day and night.

With the increased attraction in dining establishments, wine rooms, brew pubs and entertainment venues has come the challenges common to hundreds of other communities operating with similar infrastructure and parking issues.

Also the introduction and popularity of various street events have added to the equation.

The city Council has recently set up the Entertainment District in order to address a piece of this challenge as a long term solution for the city, businesses and residences.

As both a property and business owner, I applaud the difficult job and resulting end product the council has created. The entertainment venues are held to a high standard via this ordinance with regard to hours of entertainment, noise reduction, security standards and refuse maintenance. I for one believe the conditions as set forth, although strict, are reasonable and have us all heading towards a solution.

While the entertainment venues will implement the district conditions to the best of their abilities they can’t make people park in the public lots or garages. They can’t stop people from parking in the residential neighborhood.

The entertainment venues appreciate the issues raised by the residential neighbors and truly want to work as team players to resolve concerns permanently.

It must also be noted that the thousands, yes thousands of folks who partake in the Folsom nightlife, i.e., dine, shop and entertain in the Historic District are by and large Folsom residents.

For the Powerhouse alone our Facebook, email data base and ticket sales tell us over 75% of our clientele are Folsom residents. I would assume that it is probably the same for the other nighttime venues as well.

These are the happy customers, the return patrons, the folks no one hears from because they enjoy the Sutter St. nightlife and continually return with their families and friends. And they are voters.

So let’s try to help our City leaders work through the issues by being part of the solution through compromise and cooperation. These same issues are being worked out all over the country where residences and hospitality /entertainment districts co-exist.

So, what do you think? Is there too much entertainment in the Historic District? Not enough? With the new restrictions help? We want to hear from you. Discuss in the Forum: http://www.tomatopages.com/folsomforum/index.php?showtopic=40450#entry471870