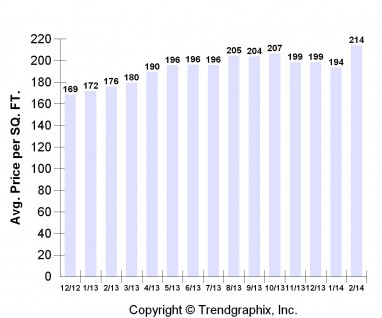 After 3 months of declining sales, falling prices and increasing days on market, the Folsom housing market has come roaring back.

According to the latest statistics from Metrolist, the average price had fallen by 7% to an average of $194 per square foot, between November 2013 and January of this year. Days on market, the time it takes to sell a home in Folsom, had risen to 49 days.

February statistics show, however, that prices spiked by 10%, to $214 per square foot, the highest level in over 6 years.  Final numbers for March won’t be out for a few weeks, but so far, the average price sold this month is at just over $210 per foot, and the average time on market has fallen to 29 days.

What’s causing this? The usual suspects; the start of the spring buying season, fear of rising interest rates, fear of missing the boat, and the fact that for many people, buying can be as cheap or cl0se to it, as renting.

As always, we have to take a wait-and-see attitude when discussing the market, but looking back, one thing we know for sure is that the bottom of the market was February 2012, when prices averaged just about $150 per square foot, and though there have been a few dips, they’ve been on a fairly steady climb since.

Whether you bought back then, or purchased your home years ago and have been waiting for the prices to come back, congratulations, it’s paying off.

If you need or want to sell, it’s a pretty good time right now, and if you’re considering buying, prices are still far below the peak of 2005, and rates are much lower than they were back then, too.

Home buying isn’t for everyone though, so if you’re comfortable renting, keep on, but know that rents have risen in Folsom about 10% in the past year or so.

By the way, in case you’re wondering, the average price per foot for all of Sac County is $167.

That’s the latest from the cheap seats. See you next time.

Talk about it with the forum community www.myfolsom.com/?p=9722