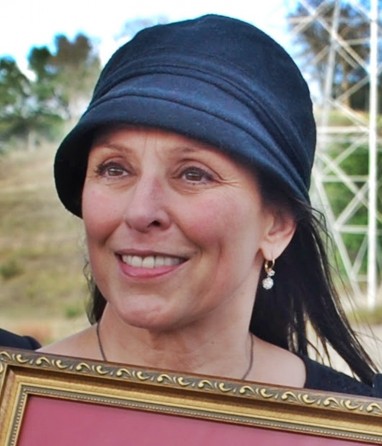 Cindy Cash, the daughter of country singing legend Johnny Cash was all smiles as she and local dignitaries broke ground for the Johnny Cash Trail and Bike/Pedestrian Over Crossing last week.

The overcrossing, which will span busy Folsom Lake Crossing Road near East Natoma Street, is expected to open in the fall.
Folsom is known around the world as the site of the prison that Cash made famous with his hit song, Folsom Prison Blues.

The unique prison themed overcrossing will serve as a symbol of Folsom history and a unique gateway for pedestrians, cyclists and
motorists.

“I love this project and know my dad would have been excited about it,” said Cindy. “I’m so thrilled that you asked me to be a part of this in honor of my dad. He was a great dad and a great artist.”

Cash was a passionate advocate for prisoner’s rights who gave numerous performances at prisons around the country. His two 1968 performances at
Folsom State Prison were among his most successful, forever linking the singer to Folsom. (Contrary to popular legend, Cash did not serve time in Folsom Prison.)

“It took me a long time to get here,” said Cindy, who was just about eight the first time her dad performed in Folsom. “This is the only venue my dad wouldn’t bring me to.” She said she cried that day and told him she wanted to come with him, but he said, “This was one pickin’ and grinnin’ you can’t come to.” Later she understood this was a “no girls allowed” place.

The trail and overcrossing project is being funded with state and federal grants provided by the Sacramento Area Council of Governments, Cal Trans and the State Resources Agency.

article courtesy of City of Folsom

What do you think? Are you a Johnny Cash fan? Will you use the trail? Discuss here:  http://www.tomatopages.com/folsomforum/index.php?showtopic=40307