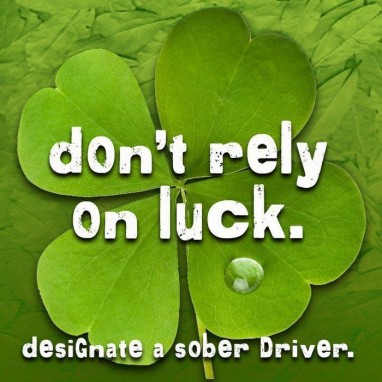 There will be lot of joy and beer flowing at various spots around town, as Folsom residents and visitors celebrate St. Patrick’s Day.  The biggest parties are likely to be on Sutter Street, where bar-hopping is popular, and at Churchill Arms Pub.

The folks at Churchill Arms are opening at 11am, with an outdoor bar and part of the parking lot blocked of for the party.

MyFolsom and the Folsom police want you to have a great time, and to get home safely. so remember, don’t drink and drive!

Folsom PD Chief Cynthia Renaud and the Avoid the 17 DUI Task Force are reminding drivers not to get behind the wheel if they’ve been drinking.

The National Highway Traffic Safety Administration (NHTSA) reports that more than 269 people were senselessly killed nationwide in crashes involving drunk drivers during the St. Patrick’s Day holiday from 2007 to 2011.

Those fatalities were preventable.

The Avoid the 17 Sacramento County DUI Task Force will be deploying 8 roving DUI patrols this St. Patrick’s Day in several communities throughout the area, looking to stop and arrest drivers who are impaired by alcohol or drugs. These DUI patrols are, in addition to regularly scheduled patrol officers, all looking for the tell-tale signs of an impaired driver behind the wheel.

“When you celebrate St. Patrick’s Day, just be smart about it. If you know you’re going to drink—whether with friends at a pub or attending a party — designate a sober driver ahead of time or call a taxi to make sure you get home safely,” said Chief Renaud. “There’s never an excuse for driving after drinking.”

According to NHTSA, in 2011, one person was killed on an average of every 53 minutes in a drunk-driving crash in the United States. Most of these crashes involved drunk drivers who had blood alcohol concentrations of .15 or higher, almost twice the legal limit of .08.
To prevent these tragedies from occurring, Chief Renaud recommends the following steps to have a safe and happy St. Patrick’s Day:

 Before the festivities begin, plan a way to safely get home at the end of the night.
 Before drinking, designate a sober driver and leave your car keys at home.
 If you’re impaired, use a taxi, call a sober friend or family member, or use public transportation to get home safely.
 If available, use your community’s sober ride program
 If you see a drunk driver on the road, Report Them! Call 9-1-1! You could save a life.
 And remember, if you know people who are about to drive or ride while impaired, take their keys and help them make other arrangements to get to where they are going safely.

The Task Force is funded through a grant by the California Office of Traffic Safety through the National Highway Traffic Safety Administration. The Avoid DUI Task Force will next deploy operations on Cinco de Mayo.