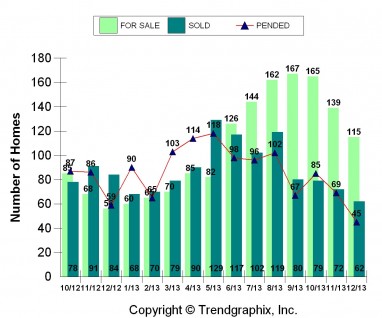 ‘No one buys in December’, and ‘wait ’til next year’ is what we used to say.  Although ‘no one’ was an exaggeration, traditionally, fewer people were interested in or motivated to buy during the holiday season. It’s cold, dark, used to be wet, and everyone gets busy with holiday activities.

The last couple of years had been different, as it seemed folks had sensed we’d bottomed out and sales were strong through the end of the year.

2013 figures show that prices, sales and inventory all fell in the fourth quarter, perhaps reverting back to the ‘no one buys in December’ theme.

62 Folsom homes were sold in December, the lowest of any month of the year, 22 fewer than December 2012.

There could be several reasons for the drop-off in sales, from the pull-back by investors who no longer saw the area as a bargain market (some blame them in part for the run-up in prices), to rises in interest rates, the holiday season and buyer frustration at getting out-bid time and again. 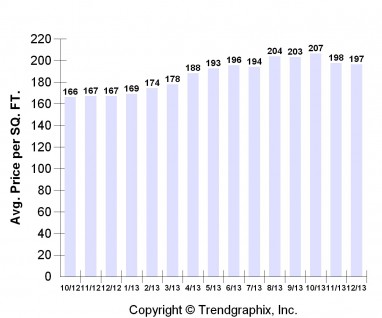 The good news for home owners is that $197 is an 18% increase over the previous year. That’s right, overall, Folsom prices ended at 18% higher than they started at the beginning of the year.

Also note that despite the December slow-down, the current rate of sales leaves us with 1.9 months of inventory, and we consider 5 to 6 months a ‘healthy’ or ‘balanced’ market.  That’s why I say that Folsom Real Estate remains hot. Homes are selling quickly, with an overall average of less than 36 day, down from over 90+ a couple of years ago. 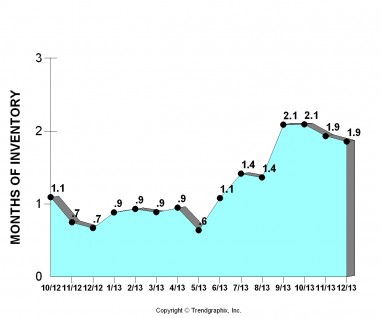 If you are thinking of selling, know that rates seem steady, and we’ve seen an increase in showings and in mortgage applications in the first week of the year. In fact, 23 sellers have accepted offers and their properties are  ‘pending sale’ in Folsom in the first 10 days of this month, compared to 45 in all of December.

If there’s good news for buyers, it’s that there is a good selection out there, with 113 Folsom homes for sale today, compared to 60 at this time last year.  Inventory typically rises beginning in January, which means more choices, but we also typically see more buyers.

So, if you don’t have to be in the market, by all means, sit tight. If you are thinking of buying or selling ‘next year’ is here.

To discuss in the forums: http://www.tomatopages.com/folsomforum/index.php?showtopic=40097#entry469158