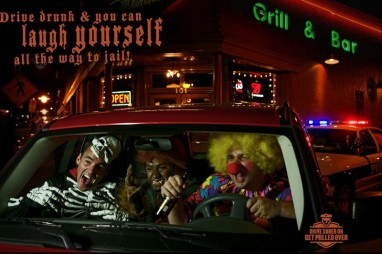 This Halloween, police, sheriff and CHP Officers will crack down on drunk and drugged drivers throughout the region with an aggressive Drive Sober or Get Pulled Over enforcement effort. The Avoid the 17 DUI Task Force has given a fair warning to all partygoers: keep the party off the road.

“The scariest part of Halloween is not the spooky costumes and scary pranks, it’s the impaired drivers. All too often, partygoers don’t plan ahead and choose to drive impaired, but a costume can’t disguise drunk driving,” said Folsom Police Chief Cynthia Renaud.

The Avoid the17- Sacramento County DUI Task Force will be deploying additional saturation patrols in Folsom, Elk Grove and Sacramento this Thursday, October 31st in addition to routine patrols already scheduled to stop and arrest alcohol or drug impaired drivers.

Halloween is one of the deadliest holidays of the year on our roadways. According to the National Highway Traffic Safety Administration (NHTSA), from 2007-2011, 52 percent of all national fatalities occurring on Halloween night involved a drunk driver. Males ages 21-34 comprised almost half of all drunk drivers who were killed in motor vehicle traffic crashes nationwide during the 2011 Halloween period. It is the deadliest night for child pedestrians of any night of the whole year.

“If you celebrate with alcohol, you don’t belong behind the wheel.” Chief Renaud said. “A sober and safe ride after the party is the best treat you can give yourself and everyone else on the road this Halloween.”

To keep safe this Halloween, the Avoid the 17- Sacramento County DUI Task Force recommends these tips:
• Before the Halloween festivities begin, plan a way to safely get home at the end of the night.
• Always designate a sober driver.
• If you are impaired, take a taxi, call a sober friend or family member, or use public transportation.
• Walking impaired can be just as dangerous as drunk driving. Designate a sober friend to walk you home.
• Use your community’s sober ride program.
• If you see a drunk driver on the road, contact local law enforcement.
• If you know someone who is about to drive or ride while impaired, take their keys and help them make safe travel arrangements to where they are going. If you think you have to ask if they are okay to drive, you already know they’re not.

Funding for this operation is provided by a grant from the California Office of Traffic Safety, through the National Highway Traffic Safety Administration.
Contact Information:
Andrew Bates
Media Relations Unit
916-355-7298
abates@folsom.ca.us

Discuss in the forum: http://www.tomatopages.com/folsomforum/index.php?showtopic=39714