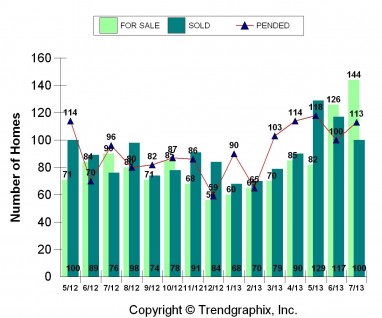 As we head toward the end of the traditional summer buying season, it’s time to take a look at where the Folsom real estate market has been and where it’s heading.

Despite fears of another housing bubble, the area has seen tremendous growth in prices and sales over the past 18 months.  I don’t know if it’s confidence in the future or safeguarding against it, but buyers seem to have determined that we saw the bottom of the market around February of 2012, and have been buying ever since.

Who’s buying? Everyone, it seems.  At the lower end, the modest 1200 to 1600 square foot 3 bed 2 bath home has proven to be a great target for investors large and small, and for first-timers and folks re-entering the market.

The mid priced homes have been moving well, with many buyers moving up to larger homes, and a few first-timers looking long term.

Higher end homes, in the million dollar category, have also started to move and builders such as Elliott and DR Horton are back to building with a frenzy.

The questions I’m often asked are, ‘how high will they go’ and ‘how long will this last?’

Who knows? All I can do is point to stats and trends, and speak from experience.  Those stats have shown that sales have out-paced new listings almost every month since February of ’12, and prices have risen almost every month as well. They also show that things may be changing, and in a hurry.

Is it over? Did sellers miss out on the buying frenzy? Did buyers wait too long and decide to pull back?  I don’t think it’s over, but it may be slowing, experts point to rate increases as the culprit.
According to Andrew Vierra of Wealthwise Mortgage, interest rates in May were a 3.625% for a payment of  $456 per month per $100,000 in mortgage debt. Today rates are at 4.625%  or $514 per month, per $100,000 borrowed.  That makes a difference of over $400 per month on a $400,000 loan.
I don’t think it’s time to hit the panic button though, many are realizing that with rents continuing to rise, it may not be much of a stretch to buy, and prices are still far off their high mark of 2005, when homes here were selling for $271 per square foot.
Even with 144 homes on the market as of today, we’re far below the record of  561 homes for sale in August of 2006, and at the current rate of sales, we have about 1.6 months worth of inventory.  5 to 6 months is generally considered a healthy or balanced market.
As for distressed properties, unless something drastic happens, that era may be over.  3 years ago, there were 153 short-sales and 40 bank-owned homes on the market. Today, 5 short-sales and 3 bank-owned.
So, it looks like our market is healthy, or getting there, and as long as people have jobs and optimism about the future, or jobs and fear that they’ll miss the boat, and if the economy does’t tank, and if rates don’t climb too high…
Discuss in the forums  http://www.tomatopages.com/folsomforum/index.php?showtopic=39463