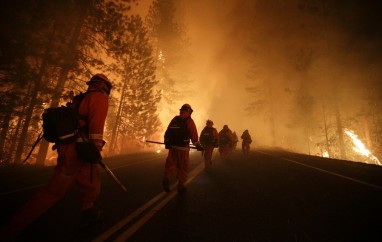 Folsom Fire Division Chief Dennis Wycoff says Folsom is doing its part to protect this much beloved national park. “Our crews are in good spirits, but tired as they are working long, hard 12 hour shifts day after day.”

A crew rotation is scheduled for Aug. 31 for four of the firefighters who will have been on the fire lines for fourteen days. The new crew includes Fire Captain Ken Cusano; Fire Engineer Jason Padilla; and Firefighters Ben Signor and Daniel Hight.

Fire Chief Ron Phillips notes that Folsom participates in the state’s mutual aid system, sending resources to assist when a neighbor calls for help. He says the City is always quick to respond, knowing that some day we may be in the same predicament, needing
help from others.

“I hope the public appreciates that this work is very difficult both physically and emotionally,” says Chief Phillips. “I’ve been in their shoes and I know from first-hand experience that’s it’s extremely challenging to work in such an intense situation while being away from your family for two weeks or more. I’m very grateful that our crews are willing to make such a huge sacrifice.”

Leave a note to these brave firefighters in the forum: http://www.tomatopages.com/folsomforum/index.php?showtopic=39529