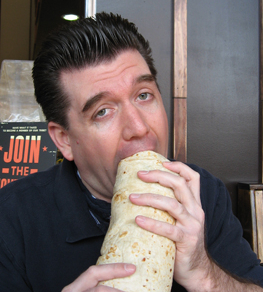 Whispers have been reaching far and wide throughout Folsom of a gigantic burrito. A burrito so big it is named the Super Monster. This famed burrito can be found at the newly opened Freebirds World Burrito, located in the Palladio Mall right here in Folsom.

This is a true story, and it has now been documented, of one man and his quest to conquer Freebirds Super Monster Burrito.

Lunch time for lovers of food is not to be taken lightly. For most, a salad might do… or maybe a sandwich, but for foodies something much more substantial is always on order.

I quickly sprang into action. Where should I eat? I am in the mood for something new but where should I go? Ah hah, Freebirds World Burrito.

I called several friends who all agreed we should rendezvous at said location. None of us had ever eaten at Freebirds before so we were all excited to check out the place. Yeah, we had heard of the Super Monster burrito before, but now having instant access to it via Palladio seemed an experience too good to pass up.

Upon entry into Freebirds I immediately noticed that it is much larger inside than I thought. A huge vaulted ceiling, at least 50 feet high, created a very spacious feeling. Some cool painted walls and music create a fun exciting atmosphere. As soon as we began to look at the menu, a gentleman approached to welcome us to Freebirds. He introduced us to some of the great tasting Cali-Style Mexican food that they serve. We were all instantly impressed with his customer service. He knew the entire menu and made great suggestions based on our responses throughout our conversation.

All of sudden, the staff shouted “Super Monster Challenge” or something like that. The server grabbed some huge tortillas (of my choice as there are several different flavors) as it takes more than one to build this burrito. He strategically positioned them on a platter that is big enough to hold an extra-large pizza. I decided to order the steak Super Monster. I always like steak so this was a no brainer. And so now giant portions began to build. First the rice, then the beans, steak, cheese, Pico de Gallo, red onions, bacon, some kind of special sauce, grilled vegies and finally the sour cream. No doubt. This thing is definitely a “Monster.”

The price came to just over $18 with a soda and tax, which is not too bad considering the size of the burrito. Also of note, we must have arrived there at the right time because people were walking through the door at an alarming rate.

Our group then made our way over to the tables and as we sat down I could not wait to take a bite. I stared at the Super Monster for a moment and quietly said to myself, “I eat because I am. I am because I eat” and with that it was time to take the first bite. 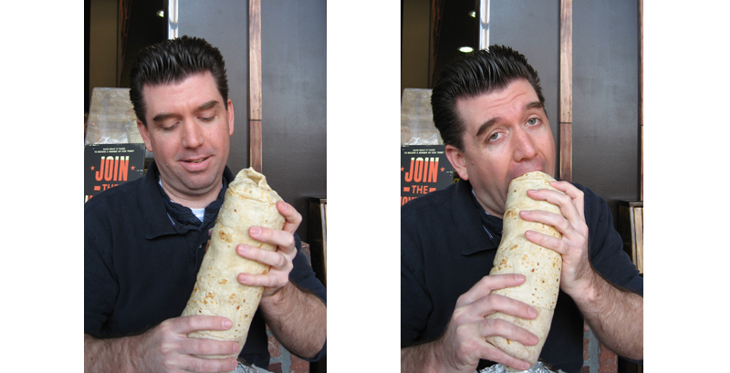 I thought I could get the whole front end in my mouth but there was no way that was going to happen (as you can see in the photos). So I took as large a bite as I could. “WOW! This is really good!” I exclaimed and it really was delicious. There are other burrito places around town that are also very good but this burrito seemed just a cut above all the rest. My friend says “Mike, that burrito is the size of a baby.” Austin Powers popped in my head… “get in my belly!” 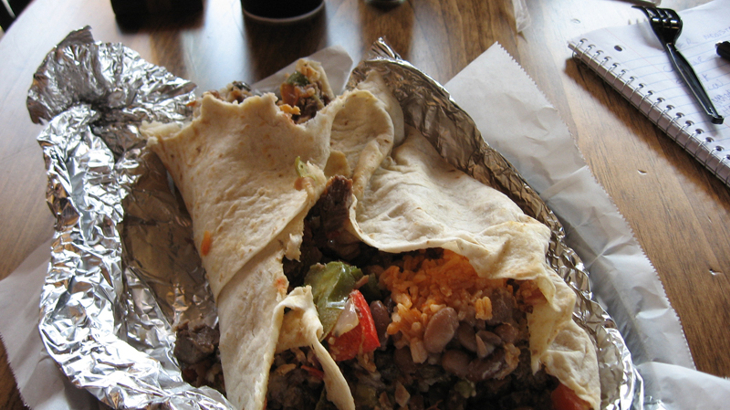 I continued to eat. And eat. And eat. I then reached the half way mark and was starting to get full. I thought “Ok, I have about 20 minutes until my stomach catches up with my head”, or so the medical psychology of eating dictates. So I continued. Then all of a sudden the tortillas split and the inside of the burrito spilled out. No problem here as I just grab my fork. Slowly but surely I continued to eat and before I knew it there was only a few bites left. I did a mental body check to make sure I was not too full. “Ok. There is still room!” …and with that I quickly scarfed down the rest of the burrito. 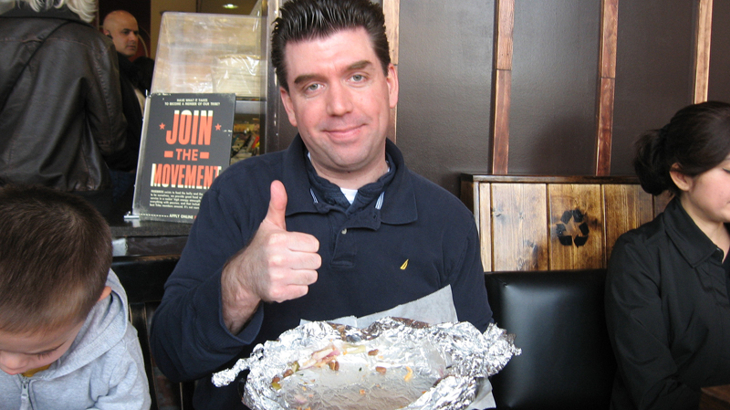 Someone, who I think was the manager, came over and shook my hand to congratulate me. “You are the first to completely finish the Super Monster!” he said, I’m assuming that only applies to this new location and I’m sure I won’t be the last. I thought maybe I would get a free t-shirt or something but the way Freebird’s give aways work is that you accrue points to put toward a free shirt. Looks like I have to go back a few times to get that free shirt. And you better believe I will!

By the time we all left, there was a line stretching out to the front door, which seems to be the trend with all restaurants and stores in Palladio. If there is a recession, then someone forgot to tell Palladio.

– In addition to loving food Mike Muir is also a serious business professional who is the Owner of Folsom based Sac Projectors (Projector Rentals for Business Professionals and Consumer Events). He also belongs to the Folsom Chamber of Commerce and FLYP (Folsom Leading Young Professionals).