Date Nights are hard to come by when you have kids, but Mrs. MyFolsom and I got an evening alone and decided to take an opportunity to do a few things we’ve been wanting to do.

A little background here – we have a “40 Before 40” list of things we want to accomplish in life before we both turn 40. The list ranges from going to Mardi Gras to serving food at a local soup kitchen. Some are hard, some are easy. More on this later. 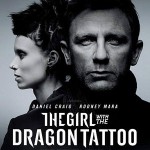 So we went to the Palladio Theater (awesome theater, by the way – digital projection, stadium seating, first class all the way) to check out The Girl With the Dragon Tattoo. We’ve both read the book, so we know how it’s going to go – but weren’t sure how well it would translate in the movies. It was very well done, and perfectly casted. The girl who played the heroine, Lisbeth, was spot on with her performance… I wouldn’t be surprised if she is nominated for an Oscar (maybe Daniel Craig, too). The movie deviated from the book in some ways but the basic plot was still there and it was an enjoyable movie. I was pretty surprised that some graphic scenes were not left to the imagination – definitely the most graphic scenes I have ever seen in an American-made movie. We both spent the remainder of the night talking about the movie, which is usually a pretty good sign the movie was good.

The second half of our date was spent at Land Ocean. We’d heard good things but for whatever reason hadn’t a chance to check it out. Being familiar with Ruby Tuesdays (the former tenant) it’s always odd to see how they change the place, but a lot of the basics like the bar and the seating arrangements are similar. It had a good ambiance to it – low lighting to make it romantic, and these cool, wine glass shaped tables. On the wall was an odd, 70s-era light-up picture of a bull on the prairie. Maybe it’s a subtle they want you to know their beef is grass-fed… I don’t know! I also thought the warm fire in the entry was a nice touch, too.

I had a New York strip steak and Annie had a seared Ahi Tuna Salad. The steak was served with mashed potatoes and a few onion rings. The thing about a good steakhouse, in my opinion, is that they don’t need to do much with meat, because they have the highest quality to begin with. The steak had minimal seasoning on it, which is what I like. You don’t need to gus it up with seasonin 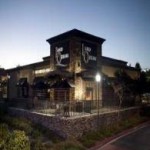 g if it’s a good cut of meat. I was only able to eat about half of it (probably 12 oz steak), or else I would have regretted it – next day’s lunch! The mashed potatoes were great too. Annie was a big fan of her Ahi Tuna Salad – it was lightly seared, and served with a wasabi sauce on the side. Very spicy but quite delicious.

The little things here round the place off. They serve water in an old-fashioned wine bottle, and the wait staff is attentive. The owner stopped by to see how we were doing but didn’t intrude.

Total damage for the night was $49-something with tax (we didn’t get wine or anything). Back to our 40-Before-40 story… one of our things was to leave a 100% tip just to make someone’s day.  I started writing “8” for the tip and Annie reminded me we need to check this thing off one of these days. No better time than tonight – perfect end to a perfect date. so we left a $48 tip. I’m not sure what our server thinks our logic was, so I am hoping this story makes way to him. 🙂